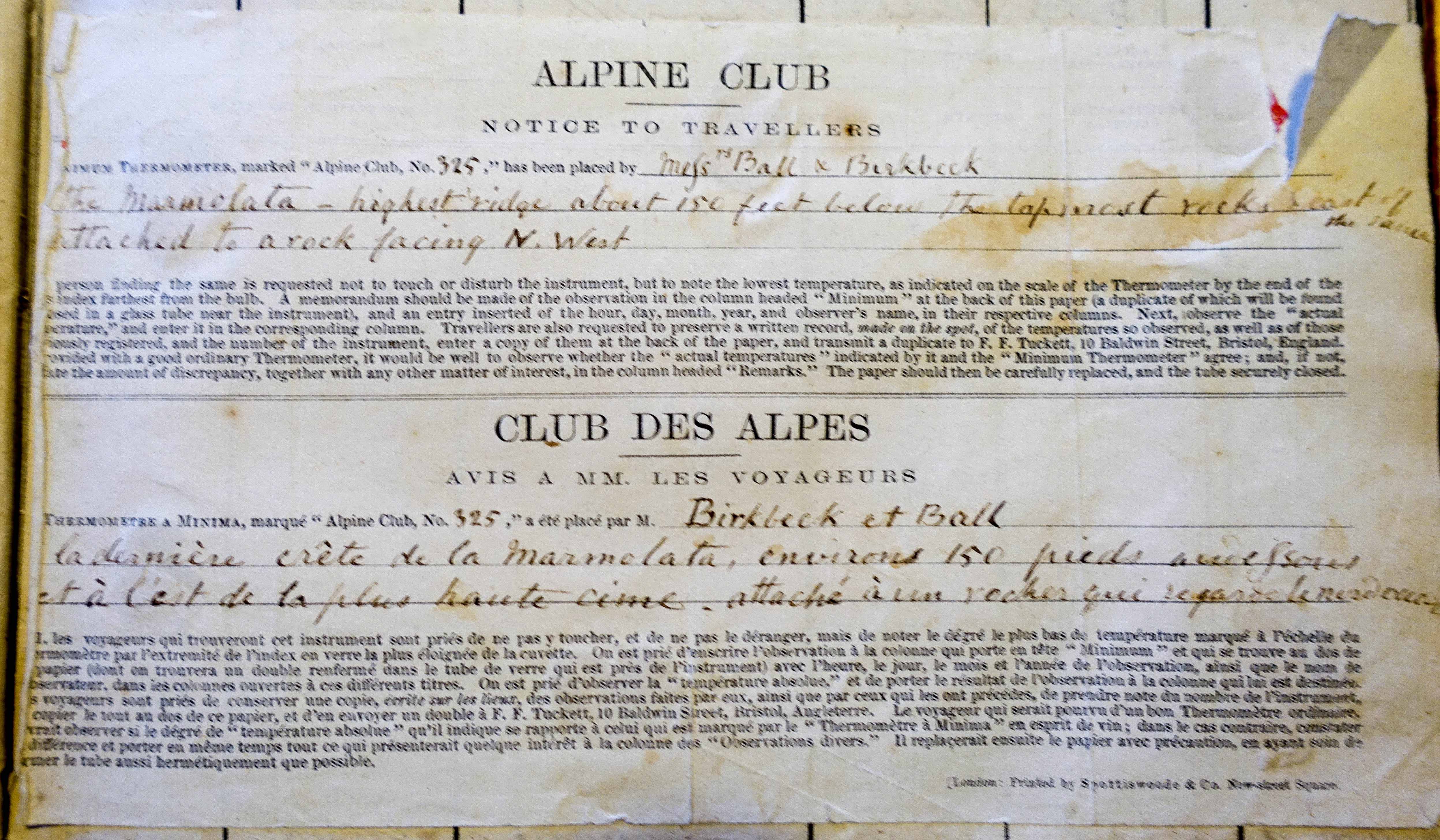 The discovery of the instructions for Alpine Club thermometer no. 325, left near the summit of Marmolada in 1860, was like finding a holy relic from the early days of mountaineering in the Dolomites. It happened when my sister Susan and I were in Cortina researching our book, Spirits of the Dolomites, where we retrace Amelia Edwards’ pioneering journey through the Dolomites in 1872, which she recorded in Untrodden Peaks and Unfrequented Valleys. 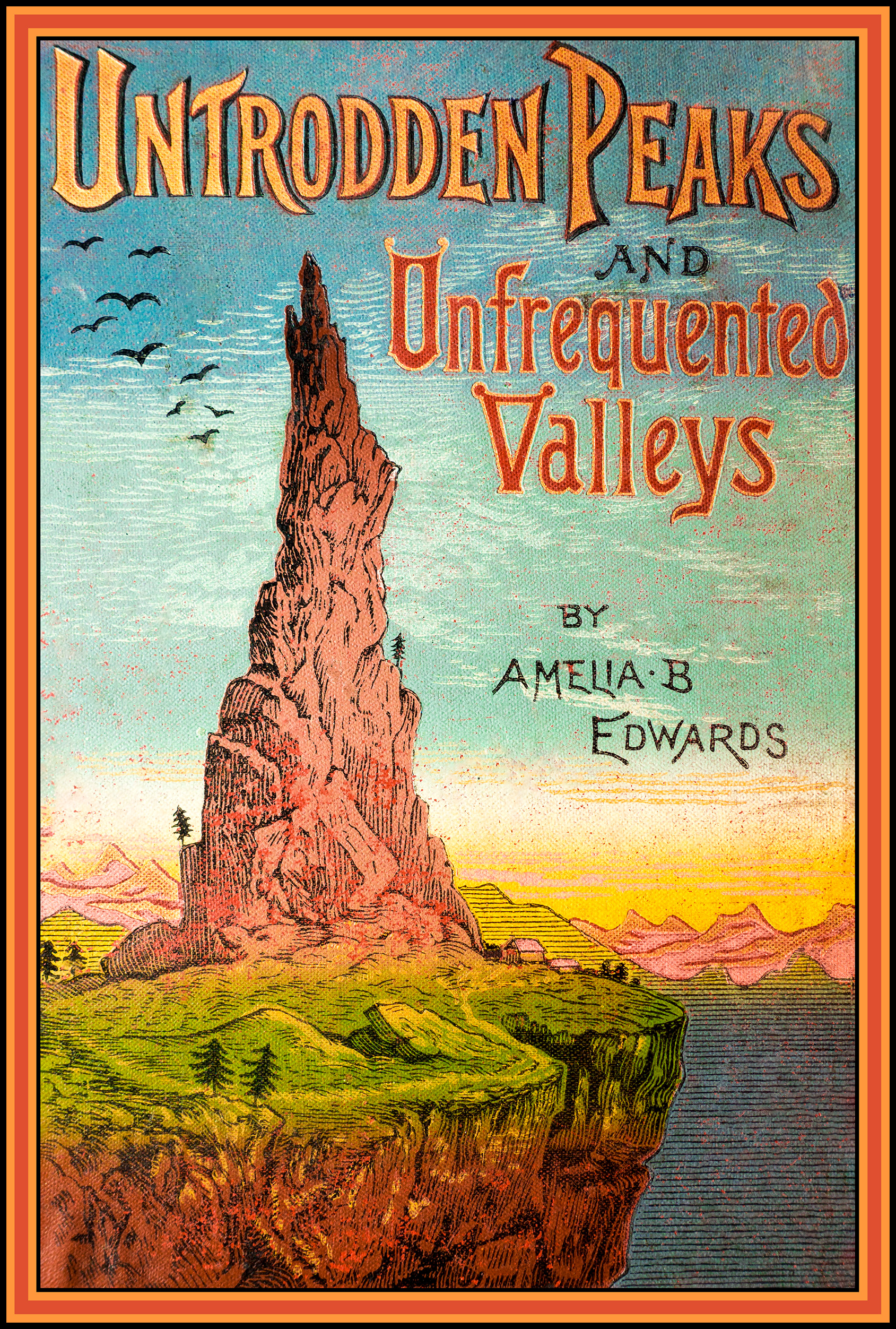 John Ball, first Alpine Club president, and John Birkbeck, accompanied by their guide Victor Tiarriz from Chamonix, left Val di Fassa on 31 August 1860 to climb Marmolada, the highest of all the Dolomite Mountains. They chose to climb Punta Rocca which turned out to be the second-highest peak and strong winds hindered their climb. Nevertheless, they left the minimum thermometer no. 325, with its instructions, a few feet below the summit of Punta Rocca which was the highest point anyone had reached on Marmolada at the time. Here is John Ball’s account, from his personal diary, of how they fixed the thermometer:

B. [Birkbeck] very miserable, shivering from the cold and altogether unhappy. The lunch over, I set to work, with Victor’s assistance, to fix the minimum thermometer to the rock behind us. He attached a slip of pine wood, which I had prepared, with a couple of strong nails, to which I added a third, and, behind the board, attached the thermometer with string! Not having wire; the wind meanwhile so piercing that, though the temperature was 5.6 = 42 Fahrenheit, my fingers were quite benumbed. I asked B. to fill up the form to be left in the glass tube. He swore bravely at the d----d thermometer, but filled up the paper tant bien que mal, which I attached. I fear the winter – or perhaps sooner – will see them all set loose from the rock: the best chance is that the snow will reach this place soon.[1] 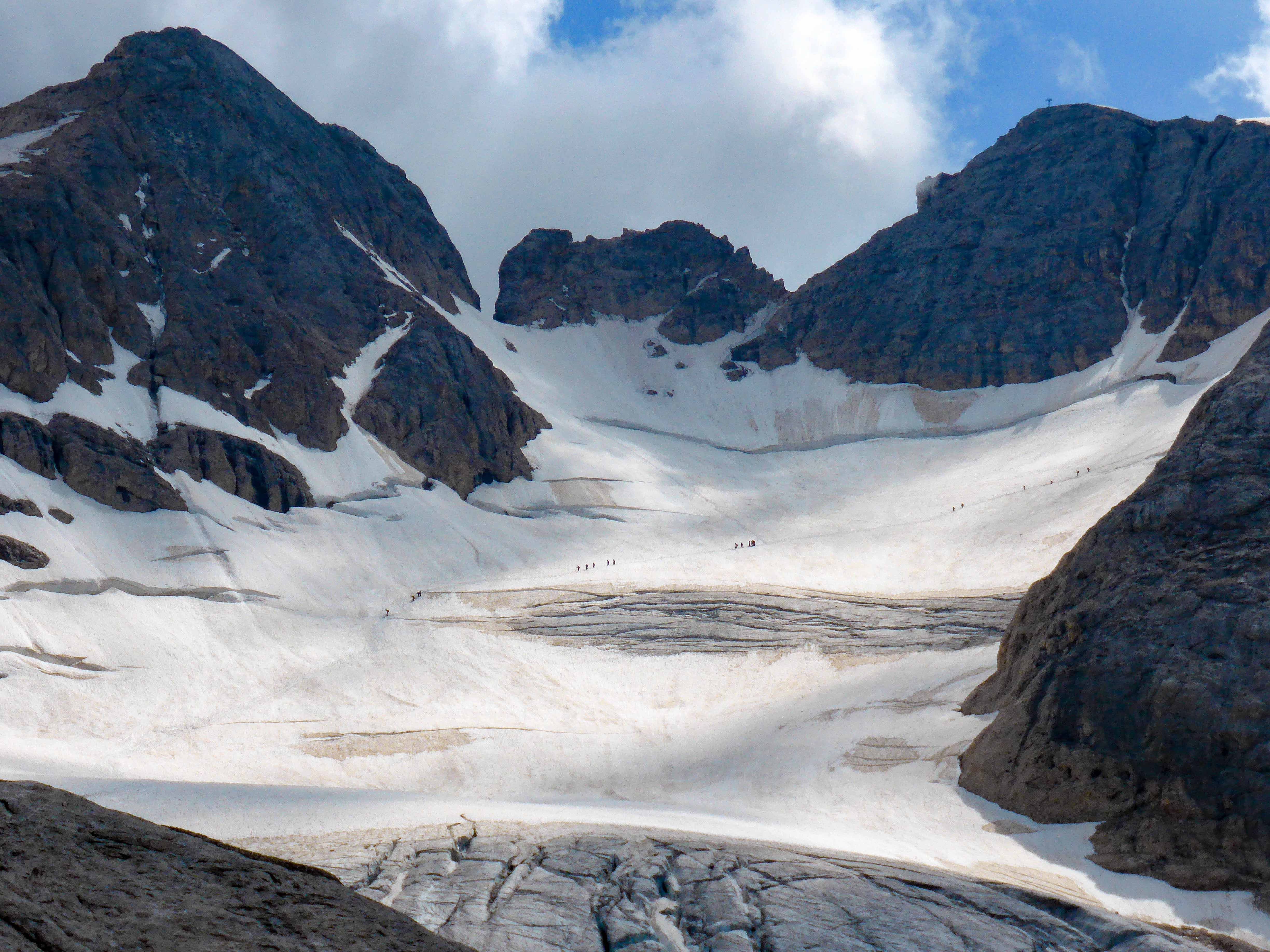 Climbers on the Marmolada glacier; Punta Penia on the right, Punta Rocca on the left.

No, we didn’t find the instructions on top of Marmolada! Here’s the story of our serendipitous discovery.

We met mountaineering historian Carlo Gandini, now in his 70s, and one of the famous Scoiattoli (Cortina Squirrels) in his youth – amateur climbers dedicated to climbing the diretissima. Carlo’s eyes lit up when he heard that we were following Amelia Edwards and invited us to his home, next to the Olympic ice stadium, where he generously shared his vast archive of photographs and documents about the first local guides who led their illustrious clients on most first ascents in the Dolomites. He gave us a photograph of Giuseppe Ghedina, Amelia’s guide, and arranged for us to meet Giuseppe’s great-granddaughter Cinzia Ghedina; the family still lives in Cortina. Carlo also went out of his way to fix-up a meeting with another old-timer, Marco Menardi. 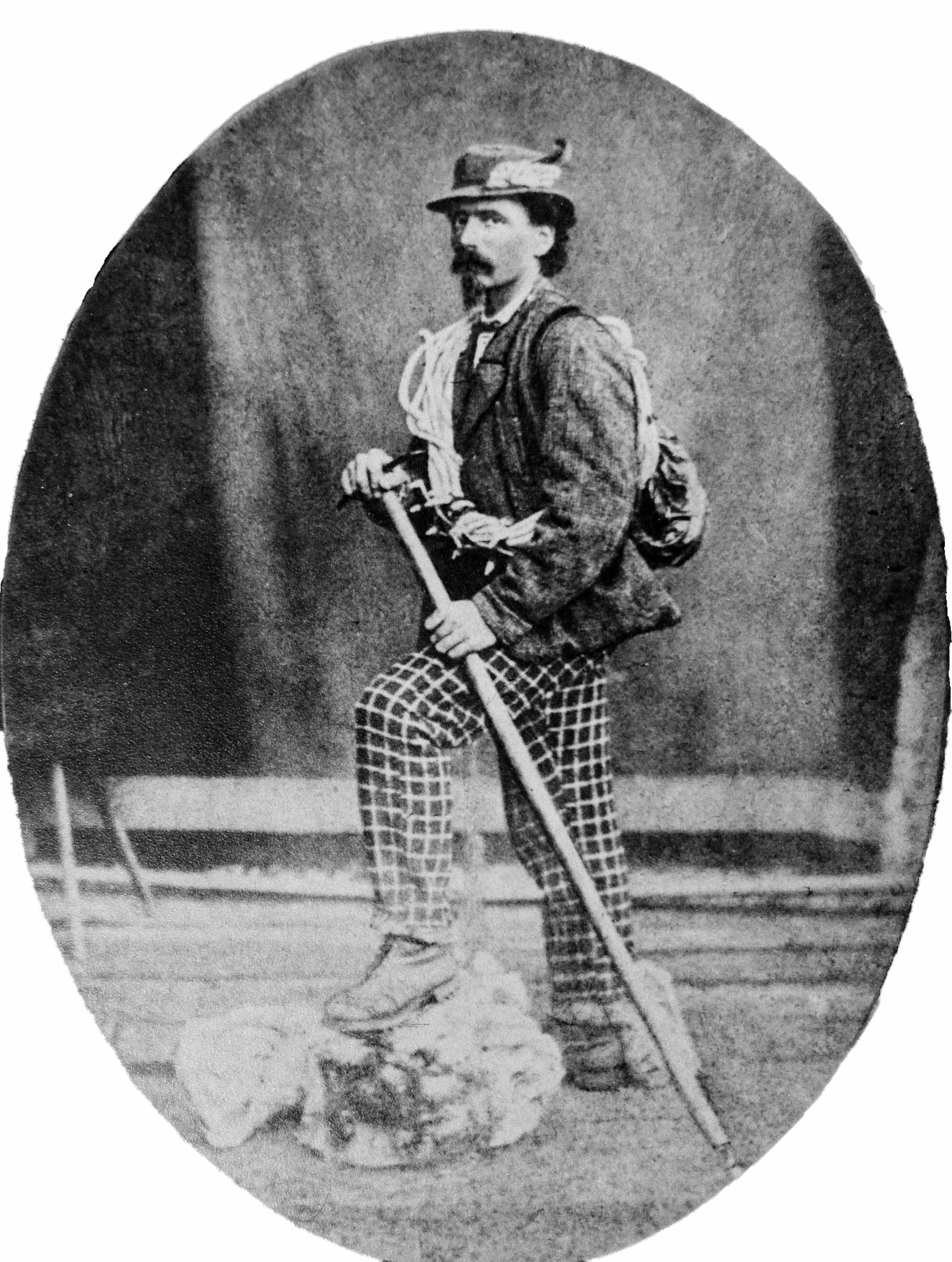 Marco is related through his father’s family to Francesco ‘Checo’ Lacedelli, the oldest Dolomite mountain guide, who was favoured by the Austrian climber Paul Grohmann; ‘Checo’ and Grohmann made the first ascents of four of the top-ten Dolomite peaks during 1863-64, when ‘Checo’ was 68 years old. Marco’s uncle, Lino Lacedelli, made the first ascent of K2 in 1954. Marco’s maternal family owned the famous Stella d’Oro, one of the first hotels in Cortina. 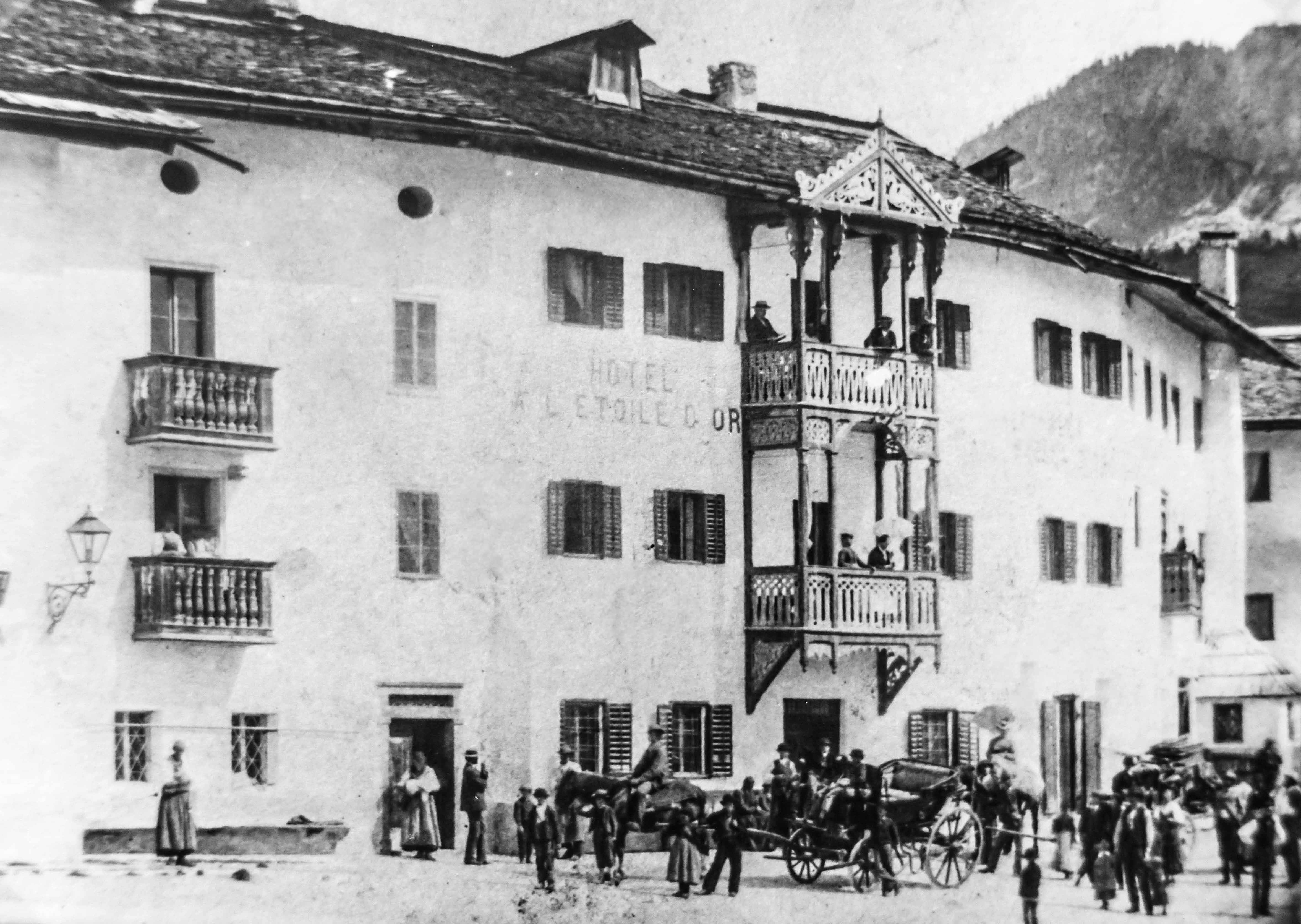 Although the hotel closed and was turned into the Casa Rurale ed Artigiana bank in 1973, Marco has preserved the guest books from when the inn opened in 1844. He invited us to his home to look at the books and see if we could find anything of interest to our research. By then, we knew that Amelia stayed at the Aquila Nera Hotel while she was in Cortina, coincidentally at the same time William Edward Utterson Kelso was a guest when he made the first ascent of Becco di Mezzodì with his guide Santo Siorpaes.[1] So our interest was more general than specific to Amelia Edwards.

Becco di Mezzodi and LaRocchetta ridge by Amelia B. Edwards, 1872

Marco is a quiet, unassuming person and a gracious host who made us feel welcome without any fuss. His kindness and generosity were appreciated as we carefully turned the pages of the Stella d’Oro guest books and travelled back in time. If we had been digging for gold then this was the biggest nugget in town; these crumpled pages contain the fading signatures of most alpine pioneers of the Victorian era and many more who visited later.

We found Gilbert and Churchill, with and without their wives, Francis Fox Tuckett, with and without his sisters, Rev. T.G. Bonney and all the usual suspects including the flamboyant signature of the artist Elijah Walton. Marco pointed out the page from 6 September 1860 where we made our surprising discovery. John Ball and John Birkbeck signed in on their way from Val di Fassa to Longarone, after they had climbed Rocca di Marmolada. And on the facing page, sometime later, somebody had attached with sealing wax the instructions for the Alpine Club minimum thermometer no. 325 that Ball and Birkbeck struggled with, hampered by wind-chill, on top of Punta Rocca.

Readers who studied O-level physics will remember that a minimum thermometer uses pure alcohol which freezes at -114 celcius. The glass index, a thin rod about 10 mm long with a disc at each end, is inside the colourless liquid and it is pulled down the bore of the thermometer by surface tension as the temperature drops. When the temperature increases, the alcohol moves past the index as it rises up the thermometer, leaving the end of the index at the lowest temperature that the thermometer recorded. The use of this piece of scientific equipment reminds us that the original members of the Alpine Club were interested in recording scientific observations as well as climbing mountains and this research tradition continues today. A barometer was another essential accoutrement for John Ball which he used to estimate the height of the peaks he climbed.

Some contextual information may help readers unfamiliar with the early exploration of the Dolomites to appreciate its significance. Mountaineering was unknown in these valleys until 1857 when John Ball reached the summit of Pelmo and wrote about his climb.[1] This was the first recorded ascent of any Dolomite peak, although we now know that Ball probably made the third ascent of Pelmo; the earliest was claimed by local chamois hunter Belli Battista Vecchio who found a human skeleton near the summit in 1824.[2] Word soon spread among Alpine Club members, through the pages of this journal, about these unclimbed, spectacular peaks and many accomplished alpinists like Francis Fox Tuckett, Leslie Stephen, Douglas Freshfield, Charles Comyns Tucker and Edward Robson Whitwell all claimed first ascents in the Dolomites during the 1860s and 70s.

The mystery of how these instructions ended up sealed into the Stella d’Oro guest book fascinated me. Marco Menardi is not sure what happened, but clearly somebody removed them from Punta Rocca and took them to Cortina. Prime suspect was Anthon von Ruthner, one of the founders of the Austrian Alpine Association, who made the second ascent of Punta Rocca in 1861. However, Paul Grohmann reported that he found the thermometer and instructions when he made the third ascent in 1862.[1] Next on the spot was Johan Jakob Weilenmann who made the fourth ascent in 1862. There is an outside chance that the thermometer survived long enough to be picked up by one of the British party consisting of the Bryce brothers, Lee Warner, Nettleship and Oxenham who made the next ascent in 1863, although they record that the whole route was covered with soft, deep snow.[2] By then, they all realised that Punta Rocca was lower than Punta Penìa and Grohmann was the first to reach that summit, the highest point on Marmolada, in 1864 with the guides Angelo and Fulgenzio Dimai from Cortina. After that, climbers were more interested in reaching the highest peak. My guess is Paul Grohmann brought the instructions back to Cortina, but I’d be delighted to hear from any readers with more information.


Apart from illuminating the adventures of these pioneers, the incident added something more valuable to our research. In Spirits of the Dolomites we set out to discover what has changed and what, if anything, remains the same since Amelia Edwards’ journey at the dawn of mountaineering and tourism in the region. We visited the same places that Edwards passed through and made contact with relatives of people she met. The humble wooden chalets and small wayside inns that Edwards wrote about have been replaced by modern apartments and swish five-star wellness centres; rough bridle paths and footpaths are now smooth highways, so changes are obvious. What remains the same is more intriguing.

From Untrodden Peaks and Unfrequented Valleys we recognise the special appeal of these mountains and the emotional effect they had on Edwards, revealed through her fervent pen portraits. Unsurprisingly, these mountains have the same profound effect on our feelings and we attribute this to something we call the mountain spirits of the Dolomites. Amelia Edwards also wrote heart-warming accounts of incidents on her journey describing the honesty, natural humility, openness, welcoming charm and authentic care shown by the ordinary people she met by chance on her travels. And what we discover from our research is that these behaviours and attitudes of genuine humanity have passed through generations because they are the same today, exemplified by Carlo Gandini, Marco Menardi and almost everyone we met, as they were in Amelia’s time. We call them the human spirits of the Dolomites.